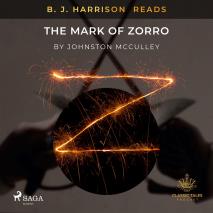 B. J. Harrison Reads The Mark of Zorro

by Johnston McCulley
Zorro is a mysterious man who always wears a large sombrero and a long black cloak. He covers his face with a black mask with two holes through which his sharp gaze follows everything that goes on around him. Zorro has some problems with the Californian governor, who thinks that the man is a thief. The governor is ready to pay a lot of money to the one who kills Zorro. This is where real problems begin for the mysterious man.

Who is Zorro? Who is actually hiding behind the mask? Is he really a thief? Might he actually be protecting the city from evil powers? Will someone dare to approach Zorro and kill him?

Find all the answers in Johnston McCulley’s book "The Mark of Zorro" from 1924.

Johnston McCulley (1883 - 1958) was an American pulp fiction writer. Before his writing career, McCulley worked as a police reporter at The Police Gazette. He is author of a large number of novels and screenplays, and a creator of the notorious character Zorro. Some of his most popular works are "The Mark of Zorro", "The Spider Strain" and "The Black Star".

B. J. Harrison started his Classic Tales Podcast back in 2007, wanting to breathe new life into classic stories. He masterfully plays with a wide array of voices and accents and has since then produced over 500 audiobooks. Now in collaboration with SAGA Egmont, his engaging narration of these famous classics is available to readers everywhere.
Listen to sample
Log in to borrow