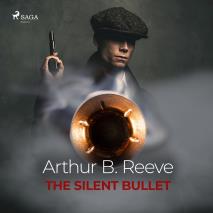 by Arthur B. Reeve

"The Silent Bullet" contains twelve of Professor Kennedy's adventures. Reeve uses the newest technologies of the early 1900s, which were nothing short of revolutionary for the time. In the title story, for example, everyone is wondering how somebody could have been killed by a bullet without anyone having heard the detonation. In "The Deadly Tube" an evil doctors hurts his patients using x-rays. "The Terror in the Air” follows the development of the gyroscope for aeroplanes.
Each story offers a fascinating look at life in the early 20th century, as well as being loaded with adventure, action, and mystery.

Arthur Benjamin Reeve (1880-1936) was a Brooklyn born mystery author. He studied at Princeton and then went on to New York Law School. He is sometimes referred to as “The American Sherlock Holmes”, having created the enduring characters of Professor Craig Kennedy and reporter Walter Jameson. He wrote numerous detective novels, often based on real cases of the time, such as the Lindbergh baby kidnapping and the William Desmond Taylor murder.