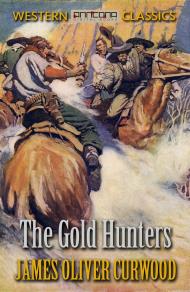 This is the second novel by Curwood that relates the story of friendship and discovery in the wilds of the upper reaches of the Canadian wilderness, between Roderick Drew, Wabigoon and Mukoki. This time they are in search of gold; following a map they had found in the hand of a skeleton. The map was drawn by an unknown Englisman, a map that caused two Frenchmen to kill each other about 49 years earlier.

In The Gold Hunters we follow Roderick and his friends Wabi and Mukoki on their adventures in the pristine North. Nowthey are in search of a treasure of gold hidden away.

They know the gold is there, they had found the map which is leading them to it. Yet it seems that the map is leading them to places that don't exist, and each day finds a new adventure and new dangers which they must overcome if they are to achieve their reward.