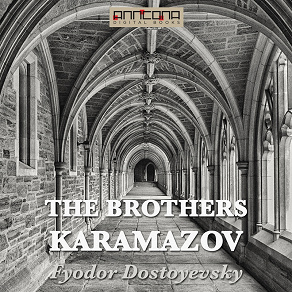 The Brothers Karamazov, published 1880, is the final novel by the Russian author Fyodor Dostoevsky, and is generally considered the culmination of his life's work.

The Brothers Karamazov, here beautufully read by Tony Addison, is a passionate philosophical novel set in 19th century Russia. Dostoyevsky composed much of the novel in Staraya Russa, which inspired the main setting. Since its publication, it has been acclaimed as one of the supreme achievements in world literature.

The book portrays a parricide in which each of a murdered man's sons share a varying degree of complicity. The Brothers Karamazov is a passionate philosophical novel that explores deep into the ethical debates of God, free will, and morality.

It is a spiritual drama of moral struggles concerning faith, doubt, reason, and modern Russia. Since its publication, it has been acclaimed all over the world by thinkers as diverse as Sigmund Freud, Albert Einstein, and Pope Benedict XVI as one of the supreme achievements in literature.

The Brothers Karamazov has had a deep influence on many writers and philosophers who followed it. Sigmund Freud called it "the most magnificent novel ever written" and was fascinated with the book for its Oedipal themes. Franz Kafka is another writer who felt immensely indebted to Dostoyevsky and The Brothers Karamazov for influencing his own work. Kafka called himself and Dostoyevsky "blood relatives", perhaps because of Dostoyevsky's existential motifs.

Although he began writing in the mid-1840s, his most memorable works—including Crime and Punishment, The Idiot and The Brothers Karamazov—are from his later years. His output consists of eleven novels, three novellas, seventeen short novels and three essays. Many literary critics rate him as one of the greatest and most prominent psychologists in world literature.