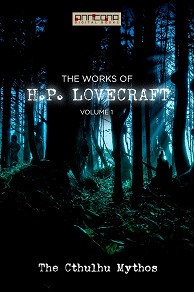 The Works of H.P. Lovecraft Vol. I - The Cthulhu Mythos

by H. P. Lovecraft
Howard Phillips "H. P." Lovecraft (1890-1937) was an American author who achieved posthumous fame through his influential works of horror fiction. Virtually unknown and only published in pulp magazines before he died in poverty, he is now regarded as one of the most significant 20th-century authors in his genre.

Horror, fantasy, and science fiction author Stephen King called Lovecraft "the twentieth century's greatest practitioner of the classic horror tale." King has made it clear in his semi-autobiographical non-fiction book Danse Macabre that Lovecraft was responsible for King's own fascination with horror and the macabre, and was the single largest figure to influence his fiction writing.

We have divided the H. P. Lovecraft large canon of novels and stories in three volumes;
Volume 1 - The Cthulhu Mythos
Volume 2 - The Dream Cycle
Volume 3 - Horror and Other Stories.
Ten of the 24 stories in Volume 1 and 2 are identical as we prefer to keep the categories intact.

The Cthulhu Mythos is a shared fictional universe, based on the works of Lovecraft.

Robert M. Price described, in his essay "H. P. Lovecraft and the Cthulhu Mythos," two stages in the development of the Cthulhu Mythos. The first stage, termed the "Cthulhu Mythos proper" by Price, was formulated during Lovecraft's lifetime and was subject to his guidance. The second stage was guided by August Derleth who, in addition to publishing Lovecraft's stories after his death, attempted to categorize and expand the Mythos.